Robota is an exploration game. Like in Jetpac you're marooned in an alien world and must collect fuel to get the hell out of there. Apart from a few words at the beggining and at the ending, though, nothing else is spoken. What is left then, is a Dear Esther sort of game where, though, a certain number of things made it, imo, a superior experience. While the game is, neither technologically nor artistically as beautiful as DE, it is much more stylized. There's a visual filter that simulates the view from inside your helmet that gives a superb sense of otherworldliness that is taken to incredible heights by the absolutely perfect soundtrack.
The fact that you have the possibility to wander freely around the planet might make it less photogenic than DE's tunnel-vision, but the gift of freedom, pacing and finding small details yourself, instead of being taken there by a corridor is much more satisfying. Apart from this, the fact that there is an objective in finding the 4 cans of fuel (even if it's "stupid" from a logical standpoint), does give the minimal challenge to make this a "proper" game.

The game is still in beta stage, but can be tried out here: http://www.indiedb.com/games/robota-lost
Posted by KOE at 1:46 AM 1 comment:

Balloon Diaspora is a short adventure game, with a very strong taste of the whimsical and ethereal.
You play a traveller in a weird land where this sort of stick figures live. The "game" has absolutely no challenge, as all the interaction you can do is talking to the various characters. After having talked to everyone about everything, you have nothing else to do. This, however, is missing the point completely. While it's far from being a masterpiece, it does succeed in taking the player to a foreign world and explore the weird culture of these stick-people. The game sports 4 different locations, and travelling between them you get a skippable sequence where you can ride the balloon. There is always darkness with a shred of light, giving presence to the world.
Above all, this is an experience in immersion, which it surprisingly succeds in a game with no character animation. It just establishes the game-rules so well, that you're really immersed beautifully in it for this short ride.

Download free here: http://cardboardcomputer.com/games/balloon-diaspora/
Posted by KOE at 1:10 AM No comments:

Black Box is a short puzzle game in the vein of Windosill where you explore the titular box. While the concept is certainly clear and simple, it never ceases to feel inventive and endearing. The "action" takes place in a single screen as you watch your actions take place in progressive transformations. It can be quite challenging, but the fact that everything you need is there makes it impossible to feel cheated.
Impossible not to recommend as it's kawaii art-style really makes it a very lovely puzzle you'll definitely want to explore. 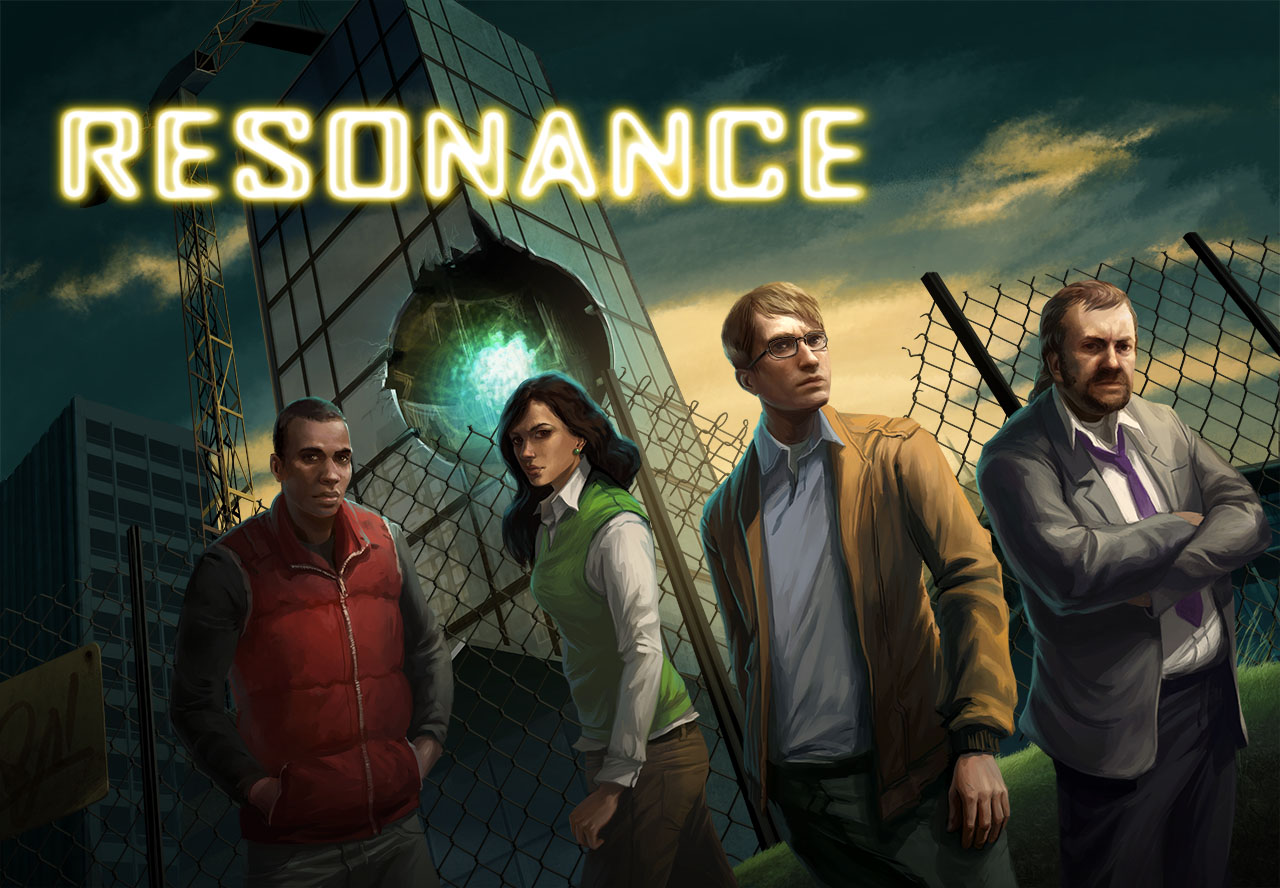 Resonance is the latest game from independent adventure game publisher Wadjet Eye, who over the years has put out the likes of The Shivah, Gemini Rue, Primordia and the Blackwell games. This game is an s-f adventure where you'll get to control up to 4 characters.
The gameplay is aided by a very straightforward interface with left-click for action and right-click for looking, and 3 inventory slots (one for objects, and one each for short-term and long-term memories). This "memories" interface gets to be clever and annoying at the same time. At its best, it lets you ask other characters about plot-points or specific background objects for clues or progressing, but when you're stuck you'll find yourself trying to put everything you see in your short-term memory folder so you can see if that was what you needed to ask about.
Some of the puzzles are really quite clever and never fall in the "slider" or "jigsaw" pattern, giving great variety. They can be however, quite challenging, but never overwhelming. One of the problems of the 4 character interface is that, while it is easy to change characters and have them trade objects between them, there is something of a loss of abstraction when you need to do it, as I'll explain. While some of the characters have their specific uses (for instance only a police detective has clearance to access the city archive at the police-station, or a doctor to a morgue), they never communicate with each other regarding what they need, despite being very communicative outside of gameplay. This makes the player feel a bit like a puppetmaster who's just making characters get objects or go to places they had no reason to go to, if not for another character needing it, although in-game they never discussed it. Strangeness ensues due to only one character having a cell-phone, and never using it to call any of the other playable characters asking for things - this clearly was a missed opportunity and it definitely broke my sense of immersion.
The characters themselves are quite endearing although they're unfortunately stereotyped (computer geek, hot latina doctor, tough guy cop, black freelance journalist). With 4 characters in an indie game, it'd be hard to make them very fleshed out, but I felt just about enough was done. They're certainly all very well acted though, which definitely helps it take off to another level of presentation.
The graphic style has the classic looks that work quite well, with the animations being quite decent, and there being a lot of locations in the game (although with never more than 3 screens each, and not many objects to interact with).
The story has a science-fiction sheen to it, although it never translates into gameplay (you won't be battling robots or aliens, assuredly). It isn't mind-blowing (although there's an unexpected plot twist) but it was definitely very enjoyable. The music is decent but never extraordinary.
In all, this is a very good, very focused game. The gameplay has a certain feel of excellence, and it's really quite enjoyable to play. It just might be one of the best recent old-school type adventures. This is the original version review.
TJD:OTE is a classic point & click in the vein of the Lucas Arts games. You play a jamaican fella named Bwana who works at a gas station with his pal Kito. The characters are instantly likeable, and while the game is 2D, it seems to share more with Grim Fandango than Monkey Island. It exhudes a very classic vibe, much aided by its reggae soundtrack and weird character design. The story isn't, thus far, anything to write home about, but the script is reasonably well written and funny. The gameplay is classic and its puzzles aren't, generally, illogical, although some necessary items are hard to find.
Being part one of five, it isn't very long, but what's here is good solid adventure game, definitely one of the best freeware adventures around. This is a point & click adventure game where you're fixed to one spot but can rotate in 360º. You play Mina who gets stranded on what she finds out is the island from Jules Verne's book Mysterious Island (one of my favourites), while she was sailing around the world. For fans of the author, you'll find a lot of tips of the hat to not only this book, but also others of his books. Here, however, there's not really a story. You have to somehow survive and you have to pace yourself through objectives. First you'll need to find shelter, eat, etc as you gradually uncover the island's secrets. In the end, you'll have access to a span of locations around the island and that definitely feels like an achievement. The gameplay, while also using some classic puzzles (especially in the later sections) relies heavily on getting and combining items. This works exceedingly well in this type of scenario in which you have to "MacGyver" yourself out of situations over and over. The solutions are always logical and for most of them, various combinations of objects can be used for the same effect. There are some cutscenes which are presented in beautiful drawn stills but are mostly circumstancial.
The game is only let down by a slight futuristic twist at the end and by the main character, who is far to upbeat and happy go lucky in what should have been a far more distressing experience. Maybe this was intended as a reflection of the book but there's something a bit different between a teenager from the 2000s lost on an island and a bunch of rugged men from the 1900s in the same situation...
Overall, a great experience, and a true delight for inventory-puzzle fans. What looks at first like a Machinarium clone is, unfortunately, a hidden object/puzzler game. While the art style is, effectively, a delight with incredibly clean lines and imaginative style, there's little gameplay here apart from trying to find barely visible objects, which take you through different areas. The puzzles are of the classic variety (Layton-esque) with some more arcade-like ones with Atari 2600-style graphics. Taken in its context... it's a good hidden object game, made better by its delightful and whimsical atmosphere. As a puzzle-adventure, it's incredibly poor, as what there is of a story is barely discernible.
The physical edition is a treat however, with a soundtrack CD, poster and an actual physical puzzle.